The Atwater Library community mourns the passing of Leonard Cohen. Click here for the Montreal Gazette's excellent coverage of his life and powerful legacy.

A treasured possession of ours is his personal inscription on the cover page of his 1964 collection of poetry, Flowers for Hitler. It is now on display in a glass-topped case in our reading room as part of the Atwater Writers Exhibition (AWE).

"No matter how long I live abroad, I do feel forever rooted in St. Urbain Street. That was my time, my place, and I have elected myself to get it right."

Since the Fall of 2014, the Atwater Library has been conducting activities to celebrate Quebec's English-language writers, past and present, with project funding from the Community Cultural Action Fund (CCAF) of Canadian Heritage.

AWE is the project acronym – for Atwater Writers Exhibition. The Library atrium features an AWE display in front of a sample of works of the writers being celebrated, ranging from Stephen Leacock to the winners of 2014 Quebec Writers' Federation Awards. DVDs of film adaptations are also included, e.g. the 2010 movie Barney's Version. These selections from the Library collection are on a marble ledge above the heritage oak card catalogue, replaced by the current online catalogue.

Everyone is invited to contribute suggestions for the project as well as a subsequent writers museum at the Atwater Library. Please email your comments and ideas to Project Coordinator Elise Moser at awe@atwaterlibrary.ca. 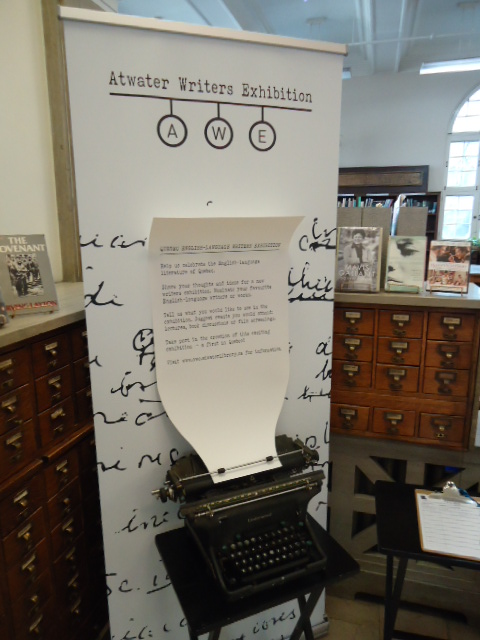 On the evening of October 1, 2014, Guy Rodgers of the English-Language Arts Network (ELAN) chaired a well-attended public consultation session in our auditorium that generated enthusiasm for the project and specific ideas to pursue. Library Executive Director Lynn Verge led off the consultation by giving a short presentation on the project and the longer-term goal of developing a Montreal Writers Museum at the Atwater Library. She cited writers museums elsewhere in the world that serve as inspirational models, including the Dublin Writers Museum, The Writers' Museum in Edinburgh, and the Casa de la Literatura Peruana in Lima, as well as an ambitious plan for The American Writers Museum in Chicago.

On November 13, 2014, writers Bryan Demchinsky and Elaine Kalman Naves engaged in a public conversation about Quebec’s great English-language writers of the past as part of our popular Lunchtime Series.

“Rapid-Fire Readings, Ricochet Writing: Montreal Authors Write Before Your Very Eyes!”
On April 30, 2015, twenty-four contemporary Montreal authors from across the impressive range of our literary scene offered rapid-fire readings from their work. They also created a brand-new literary jewel by adding a line each to a collective text. At the end of this fast-moving happening the final product was read aloud with panache and brilliant comic timing by playwright Colleen Curran. The Quebec Writers' Federation and the Atwater Library co-hosted this exciting event.

On May 28, 2015 we hosted a gala reception to launch the Atwater Writers Exhibition (AWE). Well-known cartoonist Terry Mosher (Aislin) hosted the event that attracted a throng of writers and Library supporters.

The exhibition is open to the public.

On Thursday, March 5, 2015 at 12:30 pm as part of our Lunchtime Series, we screened Still Waters: The Poetry of P.K. Page, directed by Donald Winkler for the NFB. Poet Susan Elmslie presented the film with a moving contribution by poet Kate Hall. Following the film Sue led a discussion about P.K. Page’s work and her life in Montreal. Donald Winkler was also present and took questions.

On January 22, 2015 filmmaker Donald Winkler screened A Red Carpet for the Sun: The Life of Irving Layton, followed by Q&A, also for the Lunchtime Series.

The Atwater Library collection has a DVD of this film as well as several others about Quebec's English-language writers plus movie adaptations of their works. Library members are welcome to borrow them.